Schooling with Kathrin at home 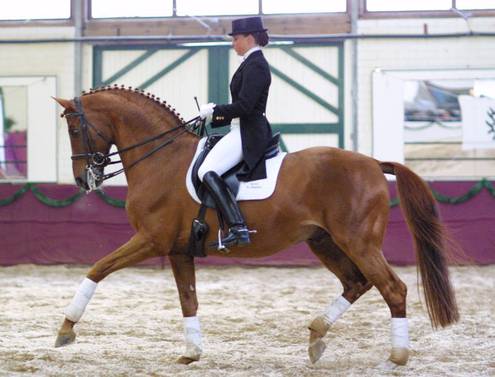 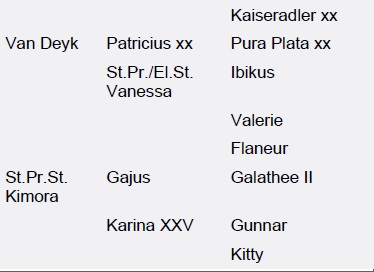 Kaiserdom won the Six year old Bundeschampionship and was Trakhener German National Champion at 6. He was also reserve champion at his performance test gaining outstanding marks for both paces and ridability-Walk 9.5, Trot 9,0, Canter 9.3, ridability 9!

Judge Christoph Hess praised Kaiserdom for his “outstanding cadence and balance, especially in the traversal movements. The tempo in medium and extended trot was regulated with much feeling”

Kaiserdom TSF is the full brother to the Grand Prix stallion Kaiserkult TSF, and the M/S level dressage geldings Kaiserstum and Kasan. Kaiserdom and Kaiserkult managed something no other warmblood horses have done before - they both won the 6yr old Bundeschampion of the German Dressage
horse in two consecutive years, winning special recognition for their dam as well as breeder Dieter Heuchert.

His sire, Van Deyk was bred by Dorothee Schneider’s father, and was awarded a premium at his licencing in 1986 in Neumünster then did his 100-day stallion performance test in Medingen scoring 112.29 points. He had an index of 90.74 for show jumping and 118.32 for dressage. Van Deyk was the Rio 2016 Gold Medallist’s first Grand Prix horse when Dorothee took over the ride in 1987 notching up over 60 wins at advanced level and Grand Prix.

Whilst Van Deyk wasn’t a heavily used breeding stallion, with just 229 offspring registered with the German Equestrian Federation, the huge success of his prodigy lead to him being awarded the converted elite-sire status by the Trakehner society in 1997 and in 2005 he was award the title Trakehner stallion of the year. As well as Kaiserdom and Kaiserkult, Van Deyk sired another 8 licensed sons and 16 state premium mares, the most famous of which is elite stallion Polarion TSF, who was competed at Grand Prix level by Laura Tomlinson (nee Bechtoltsheimer). Polarion sired the versatile Grafenstolz TSF who is still
the only warmblood horse in the history of the Bundeschampionat that managed to qualify in the three major Olympic disciplines in one year, was entered in eventing, and won that show. He went on to win the FEI World Championships for Young Event Horses in Lion d'Angers/FRA and successfully competed at CCI*** level.

Like his sire, Kaiserdom has been a competition horse for most of his life, ridden and produced by top German rider Kathrin Meyer zu Strohen. He has a long list of wins at Grand Prix, he stood in Germany for one breeding season and his offspring are known for being uphill, lightfooted, kind, and uncomplicated – they include the 2013 Bundeschampion Reserve 4 year old – Brancusi who is now training at advanced. Kaiserdom offspring are also out winning at advanced eventing.